The weather in New York is notoriously unpredictable between February and April (and in fact, all the time), but as soon as the sun breaks through the clouds and the temperature starts to climb, all bets are off: it’s time to hop in the galleries, socialize and throw in a hot take or two. The warm evenings are coming and the gallery halls are adorned with stimulating works by exciting talents. You can stroll through Tribeca or take a left at Citi Field to head to the Queens Museum, where concurrent exhibits by Suzanne Lacy, Christine Sun Kim, and Stephanie Dinkins are about to launch.

TriBeCa’s newly hatched Broadway gallery has already made a name for itself through the management of Pascal Spengemanformer vice president of Marlborough Gallery under siege, but let’s not get bogged down in industry hubbub. On March 31, Broadway launches an exhibition highlighting British-American artist Jo Nigoghossian, a 2009 graduate of the Yale School of Art, whose gnarled sculptural works shimmer with neon flourishes. Nigoghossian’s oil paintings, however, are the focus of the Broadway show, and the offerings ooze the menace of late capitalism. In To throw (2020), a rocket with an uncertain future springs from its bearings surrounded by black and acrid smoke; it sounds like Elon Musk’s worst nightmare. Escape Cruisemeanwhile, evokes the equally fascinating and terrifying boat carrying the titular characters of Taken away as if by magic.

Lively East Village O’Flaherty’s exit just completed a murderous tribute to the twisted mind of Ashley Bickerton, an 1980s New York neo-minimalist who left the Big Apple for Bali in 1993 and never looked back. The next step is Anthea Hamilton, a Turner Prize-nominated artist whose multiple practices include curatorial, sculpture and immersive installations. “The things I produce are often physically unstable – even resting on a precarious balance – because I am interested in the image of a solution or the image of a question, or the way in which one ask the question. hamilton said artist, writer and musician Ross Simonini in November. “I feel like the work I do is just about publicizing the questions that pop into my head, rather than the solutions.”

On March 13, the Queens Museum is simultaneously launching three separate exhibitions. “Stephanie Dinkins: On love and data” revolves around the artist’s use of artificial intelligence, techno, video and other mediums to advance ideas such as those expressed in his 2020 manifesto Afro-nowism. “The medium is not the only messagecovers decades of work by performance artist and activist Suzanne Lacy, who has always been geared towards overturning cultural norms and challenging conventional modes of expression. Ultimately, “Time still owes me rest”, artist Christine Sun Kim’s mural tribute to ASL communication, which also evokes Pop Art, will remain on display at the museum until January 2023.

We can’t say enough good things about Theta, Jordan Barse’s less than a year old Tribeca gallery. Barse performed intimate, carefully curated shows consecutively; right now you can check Hannah Bullfighting: “Cover Girl” which runs until March 26. This is the artist’s first solo exhibition, and Taurins renders female figures in pencil and paint, sometimes focusing on a pair of shiny patterned tights or the provocative gaze of a topless woman seen from above. downstairs.

Artist Christine Brache was raised strictly Catholic and has long harbored ambitions to become a nun. His parents’ the divorce shocked her“I thought divorce defied the laws of physics, like unbreakable glass,” brach wrote. “I went down a spiral wondering if something was real. I even tried to invoke satan, to prove that God existed. But Satan never came and my walls of perception crumbled along with my belief into a Christian god.”Bermuda Triangle” is an excavation of Brache’s crisis of faith.At the center of the anonymous gallery is an inflatable pool, and on the the artist projected a Super 8 film of a kissing couple that transitions to mouth-to-mouth sequences. Still images of the scenes line the walls, hemming the viewer with the suggestion that a cruel summer should follow in the spring. 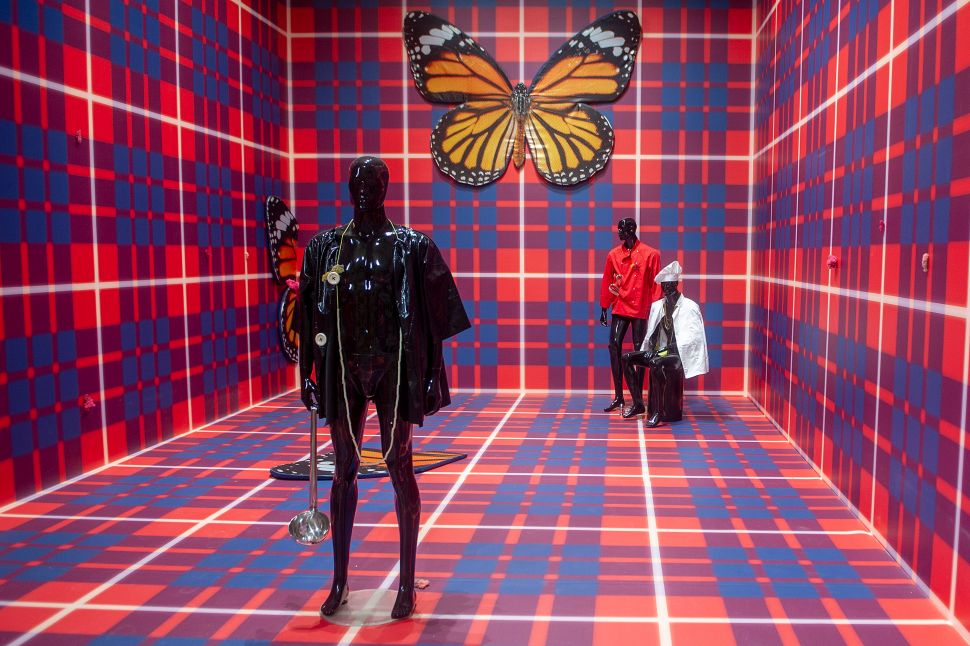