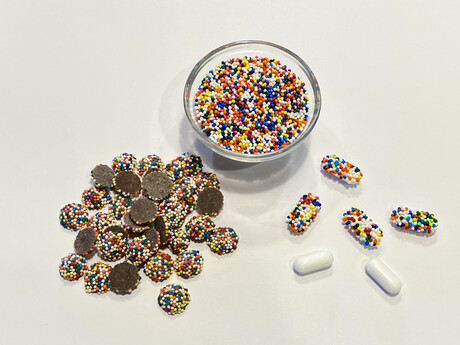 A scientist has spent months covering pills in a unique pattern of hundreds and thousands – but, far from being a failed attempt at making fairy bread, the colored covering on the pills could possibly be a method of protection against pharmaceutical fraud.

The coating technique was called CandyCode by its inventor, bioengineering professor William Grover of the University of California, Riverside. It functions as a sort of edible barcode, with the pattern created by the different colors of hundreds and thousands – technically known as nonpareils – acting as a unique identifier. If a pharmaceutical producer covered every pill it produced in the tiny candies and then uploaded a picture of it to its system, people could guarantee a pill was genuine by scanning their medications using a smartphone app.

“The inspiration for this came from the little colorful chocolate candies,” Grover said, referring to the chocolate-dusted confectionery known as Freckles in Australia.

“Each candy has an average of 92 non-peers randomly attached, and the non-peers have eight different colors. I started wondering how many different patterns of colorful nonpareils were possible on these candies.

“It turns out that the chances of a randomly generated candy pattern repeating itself are basically zero, so each of these candies is unique and will never be duplicated by chance.”

Grover glued hundreds and thousands to the pills using cake decorating glue, then had an algorithm assess how unique the pills were and how many variations would be possible, to see the impact that the system might have.

“Using a computer simulation of even larger CandyCode libraries, I discovered that a company could produce 1017 CandyCoded pills – enough for 41 million pills for every person on earth – and still able to uniquely identify each CandyCoded pill,” he said.

The technique can be applied to other media such as bottle caps or clothing labels, for the protection against fraud of wine, perfume or high-end clothing.

Unfortunately, having brightly colored pills is of course a safety hazard for children; however, the researcher notes that other potentially less catchy methods using the same principles could be used instead.

The article describing the method was published in Scientific reports.